Today is Amanda's last day at Airwaves, and most of it was spent holed up at Lucky Records, live streaming their off-venue showcase. But, Mai managed to make it to a few different venues. Check it: 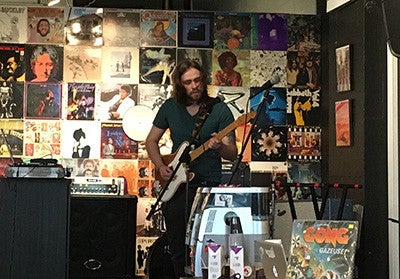 Just an Icelandic dude noodling on his guitar over samples and an electronic beat. Yet, I really dug it. - Amanda 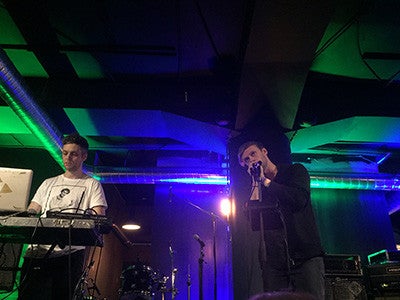 My first (and last band) of the day, Gangly, was at a brewpub about 1.2 miles from my hotel near Hallgrímskirkja. Arriving 8 minutes before Gangly were scheduled to start and the place was packed, but I managed to get a spot on the floor. Gangly is another band I was looking forward to at this year’s Airwaves. They’re a new Reykjavik super group, featuring Sindri of Sin Fang, Úlfur of Oyama and Jófríður of Samaris/Pascal Pinon. The electronic vocal trio make use of plenty of auto-tune and their respective skills crafting indie electronic music. I felt they were great at orchestrating and harmonizing, but am a big fan of Sin Fang, so am biased. (Okay, I like them so much, that I also saw their official show that evening at Harpa.) - Mai 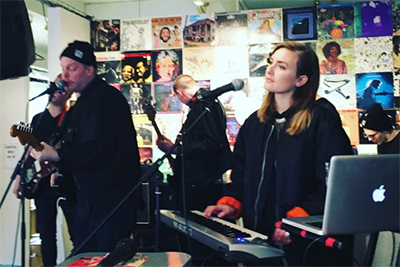 X Heart is a solid dream pop band from Stockholm Sweden. I wondered how they wound up at Airwaves, because they seem to have very little online presence. I really had to dig to find any of their tracks online, but once I did, I had to this band live. They did not disappoint, though, I'm going to be real- the male vocalist was scary as hell. At one point he demanded the crowd "come closer," and when everyone stood frozen he followed up with "don't be scared." But, we were! We all were. - Amanda 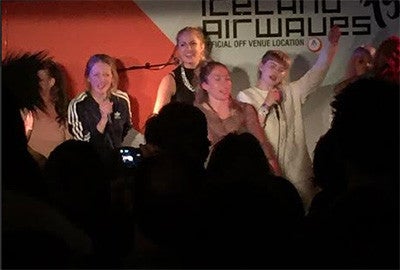 When they waltzed in (not recognizing them) I noticed that these were stylish women with great presence. The space then got crowded with people bringing in small girls of all ages. The next thing I knew their voices exploded on stage. These “Daughters of Reykjavik” rap out pro-feminist missives in Icelandic. A revolving group of very many women, the stage had at least 7 rappers at this performance, each taking turns to rap. Afterwards I got in the elevator and realized I was in close quarters with these amazing performers (so I sneaked a photo). So worth it. - Mai 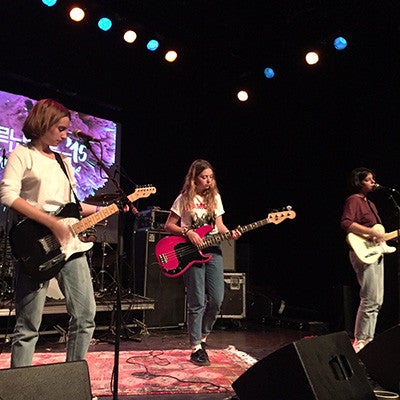 One of the purely rock acts I saw at Airwaves. Mourn are four teenagers from Spain, who are inspired by Sleater Kinney, PJ Harvey, Sunny Day Real Estate and the Ramones. They play powerful pop rock with gorgeously layered vocals accompanied by enthusiastic guitars and powerful drumming. The band seems to be inspired by all the best of 90s-era music and it’ll be great to see how they refine their songs as time goes on. - Mai 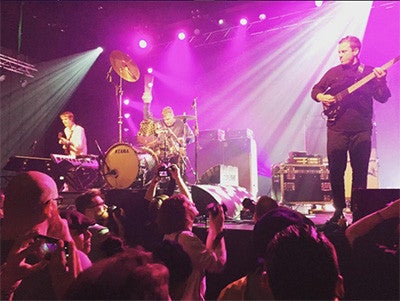 I go to live shows to connect with the band. Even the tiniest bit of banter can go a long way to personifying the music. But, I noticed right away that Battles didn't even bother to put vocal mics on stage. So, there was absolutely no chatter, just rock. The fact that Battles didn't address the crowd at any point during the set, paired with the experimental instrumentals, made me almost feel like I was watching a makeup-less version of Blue Man Group. It kind of bummed me out. But, my feelings about Battles were redeemed when I wound up in the security line at Keflavik Airport with them. Now that we've taken our shoes off and put our electronics in separate bins together, I really feel like I get what they're about. - Amanda